I don't know if there is anyone else out there who doesn't really like opening the rings of you filofax, but I don't! I'm always worried things will fall out or that the mechanism will wear out too soon, and instead I just let things stay where they are, which sort of defeats the purpose of a filofax... And when I eventually muster up enough courage to open the rings I have a lot of reorganising to do.

So I cut out little squares of paper, and punched them with three holes so that they will fit into all my organisers (mini, personal and A5) and made small slits from the punched holes so they can be removed from the organiser without opening the rings. I have blank pieces in all my organisers and keep stacks of them around the house and in my office, too.

I use these mostly for GTD inbox/bucket style notes. Whenever I think of something I need to put in my inbox I jot it down. Later I just pull the notes out from all the organisers (and my pockets!) and put them in my inbox. 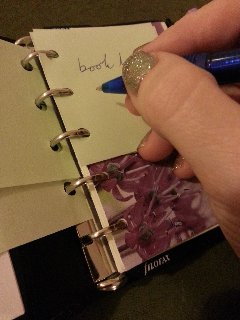 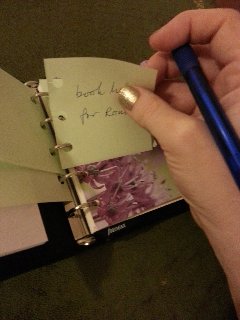 Most of them are torn up when they end up rewritten as items on a next actions list, but this one was added as a reminder in my calender. See? 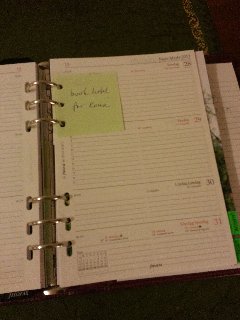 Of course I have to be careful and make sure the slits are not too worn if I reuse it, but most of the time they are ok being moved a few times.
Posted by Maria at 23:46